Second Helpings was honored today as the PGA Tour’s 2018 Charity of the Year.  The award comes with a $30,000 grant from the PGA TOUR to assist Second Helpings’ efforts to combat hunger in South Carolina.

The PGA Tour’s press release applauded the charitable efforts of Second Helpings, the RBC Heritage and Heritage Classic Foundation efforts:  “Since its inception in 1987, the RBC Heritage and Heritage Classic Foundation have made a charitable impact of $39 million with $1.6 million generated in 2018. Tournament proceeds benefit a variety of local charitable organizations that impact those directly on Hilton Head Island and the Lowcountry, like Second Helpings, which collects food seven days a week and distributes it to neighbors in need.”

“Everyone at the RBC Heritage and Heritage Classic Foundation is proud to be associated with a charity like Second Helpings,” said Heritage Classic Foundation President Steve Wilmot. “They fill an important role in our community by striving to eliminate hunger in the Lowcountry. Each tournament on the PGA TOUR supports important non-profits, so it is a great achievement to be recognized among all the worthy nominees.”

Y’all, We Did This Together 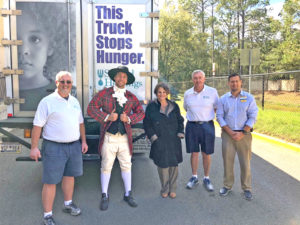 Second Helpings’ board of directors and staff say thank you to the founders, hundreds of donors, volunteers, agencies and food donors who serve our mission to rescue and distribute food to those in need.  Your long-term support and involvement earned Second Helpings this recognition.  What a great testimonial to all who are now and have been involved with Second Helpings for the past 27 years.