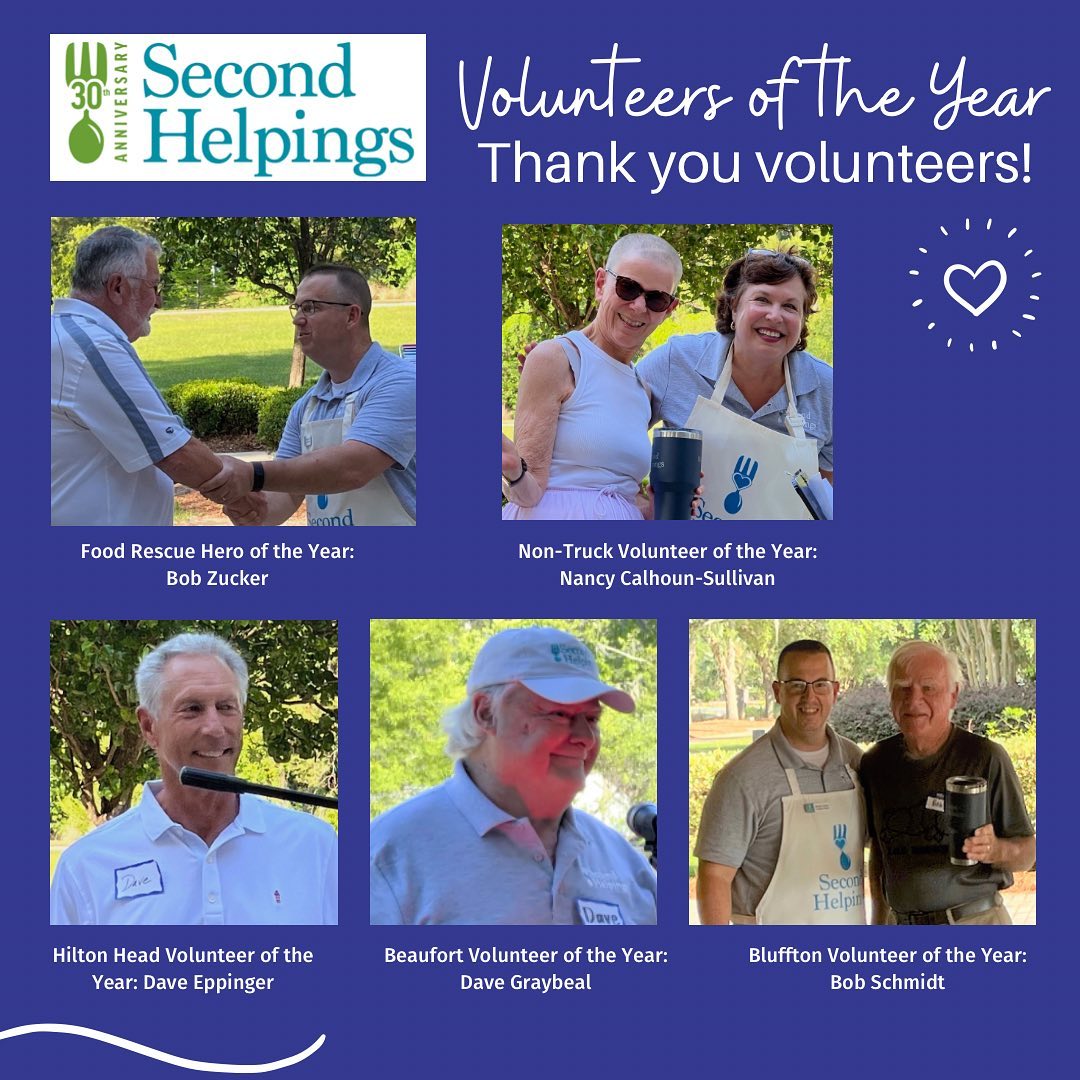 Second Helpings, a nonprofit food rescue organization serving Beaufort, Hampton, and Jasper counties, recognized five key volunteers at appreciation events in May. Volunteer of the Year honors were presented from our Beaufort, Bluffton and Hilton Head truck crews, along with the Non-Truck Volunteer of the Year, and a special award to our Food Rescue Hero of the Year.

More than 325 volunteers contribute over 20,000 hours a year rescuing food and delivering it to soup kitchens, food pantries, churches, and other organizations in the three-county area.

Beaufort Volunteer of the Year:

Dave Graybeal, a truck volunteer and team leader, was named Beaufort Volunteer of the Year. He received nearly a dozen nominations from his peers, who described his willingness to make himself available, the caring nature he presents, and his ambassadorship on behalf of Second Helpings.

Bluffton Volunteer of the Year:

Bob Schmidt, a truck volunteer, was named Bluffton Volunteer of the Year. He was nominated by a fellow volunteer who said, “Bob makes himself available for his scheduled runs as well as filling in for others…From driving to helping to assisting, Bob is always willing to give of himself.”

Hilton Head Volunteer of the Year:

Dave Eppinger, the Monday Day Captain, was honored as the Hilton Head Volunteer of the Year. He was nominated by multiple team members, who referenced his dedication, kindness, organization and preparedness.

Non-Truck Volunteer of the Year:

Nancy Calhoun-Sullivan was named the Non-Truck Volunteer of the Year for her faithful work with the Fill the Need Program, a partnership between Second Helpings and Palmetto Breeze Transit that helps those who commute long distances to work on Hilton Head and in Bluffton.

Food Rescue Hero of the Year:

A special award, Food Rescue Hero of the Year, was presented to Bob Zucker. Zucker has logged 434 trips to date, rescuing and delivering food to our agency partners. He has also been a great ambassador who has recruited many great long-term volunteers.

Executive Director Marcus Tanner praised these special volunteers and the more than 300 others who drive the refrigerated trucks, support the Fill the Need program, serve as ambassadors, and provide other essential support. “Volunteers are our most valuable asset and we could not have rescued and delivered 3.2 million pounds of food in 2021 without the men and women who give so generously of their time to help feed the hungry. As we celebrate the 30th anniversary of Second Helpings this year, it is important to note that Second Helpings was started by volunteers and we continue to enjoy the support of our community. Hunger is ever-present, and we exist to help those in need.”