It Started from the Trunk of a Car: St. Stephen’s Outreach Food Bank Serves the Hungry 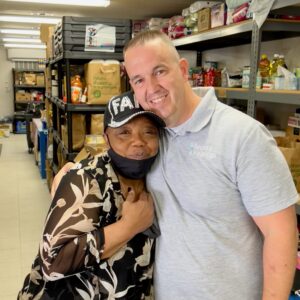 In 2000, Elvira Shuler and her daughter, Helen (pictured, with Second Helpings Executive Director Marcus Tanner), began offering food to the hungry from the trunk of Elvira’s car in Ridgeland. What would become the St. Stephen’s Outreach Food Bank soon transitioned to Elvira’s front porch, with Helen driving the roads passing out food.

Although Elvira passed away in 2005, their labor of love for the community continued to grow.  St. Stephen’s Outreach is now a food bank that serves area residents in 50 to 100 cars each Monday and Thursday.  Second Helpings delivered nearly 200,000 pounds of food to this agency in 2021.

When Helen’s pastor at St. Stephen’s United Methodist Church first told her food deliveries were going to come from Second Helpings, she realized they had no place to keep the food. They put food in the pews of the 200-year-old church until donations allowed for the purchase of “a tiny brown building.” Out of that building, food was served, clothing was distributed, and even some furniture was given away.

The food bank has since moved into a larger building, also on church grounds. Twice weekly, Second Helpings trucks arrive with food from area grocery stores, Helen and her dedicated volunteers pack bags of food, and people from throughout Jasper County line up for food.

“When that (Second Helpings) truck comes, it is like Christmas,” Helen says.  “People come running from everywhere.  There’s even a lady who sits at her window and waits for the truck. I don’t send anyone home empty-handed.”

Helen also appreciates the Second Helpings volunteers who bring the food to St. Stephen’s Outreach.  “I love my guys,” she says of the men and women volunteer drivers.  And she is grateful for Second Helpings’ continuous support over her agency’s 22-year history. “Second Helpings has been with us the whole time.  They make me feel like they care.”