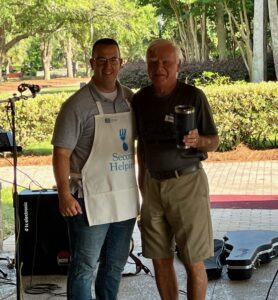 Bob Schmidt (pictured along with Executive Director Marcus Tanner, at left), a truck volunteer, was named Bluffton Volunteer of the Year. He was nominated by a fellow volunteer, who said, ”Bob makes himself available for his scheduled runs as well as filling in for others. Bob is a personable guy who is always willing to assist, he is pleasant and has a positive personality. From driving to helping to assisting, Bob is always willing to give of himself!”

Also recognized at the event were the following Bluffton volunteers:

Thank you to Sun City TV for covering the event!

The Bluffton event was the last of three Volunteer Appreciation Events.  Earlier this month, the board and staff honored Hilton Head and Beaufort volunteers.

This year marks Second Helpings’ 30th anniversary.  We have gone from 14 volunteers in 1992 to more than 325 today, and have delivered more than 40 million pounds of food delivered to agencies to feed the hungry in Beaufort, Jasper and Hampton counties.

Congratulations to the honorees – and a huge thank you to all the volunteers who enable Second Helpings to assist the less fortunate in the South Carolina Lowcountry.